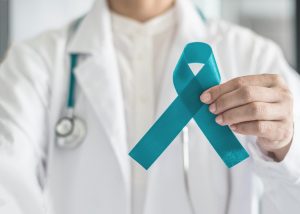 September is Ovarian Cancer Awareness Month — an opportunity to increase awareness so that women reduce their risks of the disease and detect it sooner, and so that we can all encourage public education and continued research.

According to the American Cancer Society, in 2018, an estimated 22,240 women in the U.S. will be diagnosed with ovarian cancer, and approximately 14,070 women will die from it. Women most at risk for ovarian cancer are in their 50s and 60s.

Fortunately, the rate at which women are being diagnosed has been gradually decreasing over the past two decades. Unfortunately, there is still no adequate screening test for ovarian cancer that is available, and the disease is hard to detect in its early stages when it is most treatable.

Therefore, it’s important for women to be aware of the possible warning signs and symptoms of ovarian cancer as well as to assess their reproductive history and family history of the disease. Ovarian cancer symptoms are often subtle and can be easily confused with other issues.

Assess Your Reproductive and Family History

Research shows a link between the number of menstrual cycles a woman has had in her lifetime and increased risk of developing ovarian cancer. A woman is at greater risk if she:

Also, be aware that approximately one in four women diagnosed with ovarian cancer has a strong family history of the disease, and the greatest risk factor is an inherited mutation in one of two BRCA genes. However, women who have a grandmother, mother, daughter or sister with ovarian cancer but no known genetic mutation still are at greater risk of developing the disease.

How to Reduce Ovarian Cancer Risk

Although ovarian cancer can’t be prevented, women can talk to their healthcare providers and identify the best steps to take to help reduce risk. If ovarian cancer runs in the family, a consultation with a genetic counselor may be recommended.

Here are examples of non-surgical approaches a gynecologist may recommend:

A gynecologist may also recommend a surgical procedure such as:

Finally, be aware of this good news regarding ovarian cancer: according to the American Cancer Society, familial genetic research is beginning to offer clues about how the disease develops. Eventually, this is expected to lead to new therapies that could be used to prevent or treat ovarian cancer. Learn more.